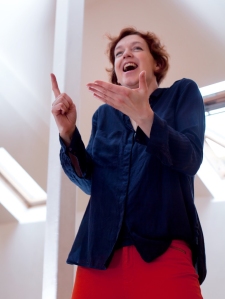 Emma Jennings has not always been a laughing yogi. She has a background in publishing and founded the Green Guide for London and Juno Magazine, which she published and co-edited for 7 years. She has a degree in anthropology from Cambridge University and has studied NLP, double loop learning, clowning / creative intelligence, gibberish and the art of nonsense and compassionate communication.

Emma is one of the co-founders of Brighton Laughter Club, a non-profit organisation which has been running weekly laughter sessions in the heart of Brighton since 2011. In 2019 she was made a Laughter Ambassador in recognition of this. She also runs laughter and play sessions for schools, businesses, and social enterprises in addition to creating bespoke sessions for private clients (for events such as birthdays, hen parties and weddings).

She was initially attracted to laughter yoga after a particularly stressful period in her life and was hooked from the first session, from which she emerged feeling both relaxed and energized. She has found regular practice of laughter has been the best possible antidote to stress and helps her to keep calm in the face of challenge.